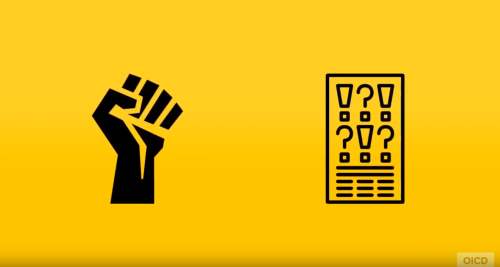 We humans have made weapons from many things over countless millennia. Weapons have been carved from wood, blown from pipes, shaped from stone and rock, forged from metal and fired from exploding cylinders. Perhaps the largest and most terrifying weapon ever created was the atomic bomb that split the atom to cause the ultimate damage and death using fire and energy.

Here I examine how Mankind’s ultimate weapon may be that shaped from a most unexpected material in the catalogue of human weaponry–the human imagination.

This is a dive into the terrific and terrible power that comes with weaponizing identities.

Check an encyclopedia like Britannica for listings on the world’s most deadly weapons and you’ll find some likely suspects: the machine gun; the submarine; the rifle; napalm; the atom bomb. There is no disputing the power of such weaponry, and the ability of such technologies to cause the mass destruction of human lives and habitats.

But what if I told you that there was a technology you could use to turn tens or hundreds or even millions of people into violent killers? Surely a technology that allowed you to gather and motivate an entire army of intelligent individuals to destroy whatever or whomever they are told to target would represent a weapon far more powerful than any individual weapon technology?

And what if I told you that employing this technology wouldn’t be too hard—you’d just need to stimulate the imaginations of these people using certain techniques? For one, you would tell them a convincing story about who they were and where they’d come from. Then, you’d talk about how their lives, and the lives of their families and fellow citizens,  maybe, for good measure,  even the survival of their entire way of life, were all being threatened by the people(s) you wanted destroyed.

And what if I told you that, if you did this with enough credibility and influence, the people you were trying to influence would then act to destroy that target, even if people in this target group had, up until that point, been neighbors, relatives, friends and partners of those people you had turned into killers?

In “When Identity Becomes a Knife”, Helen Hintjens reflects on the 1994 Rwandan genocide. She shows how cultural divisions between the Hutu and Tutsi ethnic groups were carefully manufactured and myths of their respective origins reinvented. The effect on the imaginations of those affected was to block the “human capacity to extend and limit compassion”. These techniques legitimized the terrible collective violence that killed 800,000 people in 100 days, turning “identity into a knife that severs social relations and disembowels entire countries”.

The terrible power of weaponized identities in Rwanda is by no means a standalone case. Other prominent examples include the weaponization of Albanian and Serbian identities in Kosovo, Sinhalese and Tamils in Sri Lanka, and of course German-Aryan vs. Jewish notions of identity that operated to provide a rationale for the Holocaust.

Despite its power to influence the behavior of mass populations in conflicts such as these, identity weaponization can also be observed when terrorist recruiters actively attempt to shape the identity of a small number of targets, providing them with new versions of who they are and what religious/ethnic/racial group they should belong to, and which cultural versions of themselves they need to eliminate. (Berger’s book “Extremism” is an excellent guide to how this functions in practice).

Whatever the context in which it is employed, identity weaponization is carefully targeted to manipulate people’s  sense of who they are, where they come from, where they belong and who is their enemy.  Through the manipulation of their cultural imagination, identity weaponization convinces people that they are divided from one another, severing their ability to feel affinity with manufactured enemies, and potentially turning these targets of manipulation into weapons capable of orchestrating terrible acts of violence.

So should we be fearful of identities?

Nobel Prize Laurate Amartya Sen, in his book “Identity and Violence”, sees that there is great cultural richness, potential and possibility in human identities, but that we should be very mindful and concerned if certain kinds of identity shifts take place.

The richness of identity comes from the fact that “…the same person can be, without any contradiction, a Norwegian citizen, of Asian origin, with Bangladeshi ancestry, a Muslim, a socialist, a woman, a vegetarian, a jazz musician, a doctor, a poet, a feminist, a heterosexual, a believer in gay and lesbian rights”. This plurality means that identities can and should be entities that empower and liberate us to fulfil our potential and stimulate us to grow.

The danger, Sen says, arises when we start seeing this state of plurality, of multiplicity and choice being diminished and restricted. When we can no longer play with identities, but are only able to see ourselves in singular ways as members of only one ethnic group, or religion, and/or when these things become the most important things in our lives we may then be in trouble. Weaponization may well be happening to us and/or our communities.

Can we counter or prevent identity weaponization?

Given the scale of the problem, one would think that there would be “situation rooms” around the world filled with the world’s best and brightest scientists and professionals all cooperating to try to crack the code of identity weaponization.

While the science is progressing towards describing what is happening during weaponization on a variety of levels– socially, cogitatively, and neurologically–cooperative efforts are often stymied by the fact that the topic of identity is split between many academic disciplines which don’t interact, nor necessarily use the same theory, method or jargon.

Exceptions to this are models such as Positioning Theory, a scientifically-derived (primarily from social psychology and political science) approach that is helping conflict practitioners to get a grip on some key identity dynamics and integrate the evolving scientific understanding into practice (Here is a paper illustrating how positioning theory is being used to help solve intergroup conflict in the Philippines).

Despite models such as these, however, practical tools to prevent and counter the weaponization of identity seem thin-on-the-ground in real world practice. Part of the problem seems to be that there are few research methods able to reveal a detailed picture of how cultural manipulation (that de-pluralizing of identity options) is taking place, as well as a lack of a systematic platform upon which to strategize and counter the effects of these manipulations. The OICD’s Engagement Methodology for Identities in Conflict (EMIC), is an attempt to address some of these limitations.

While the technology that allows the imaginations of our fellow humans to be manipulated is doubtless many millennia old, the platforms and propaganda techniques that people can access today potentially makes identity weaponization more likely and more easily practiced. The answer to whether we can prevent or counter identity weaponization may depend upon whether we are able to develop and deploy effective and timely tools to engage and counter the efforts of those intent on arming the human imagination.

Interested in learning more about the power of identity and culture to shape our world? Follow the in-article links to the recommended readings or read more OICD articles.  Sign up to the newsletter below and also consider becoming a member of the OICD (free), where we are committed to finding ways to build upon the richness and potential of human cultures and identities, and prevent and counter their use as divisive and destructive forces.