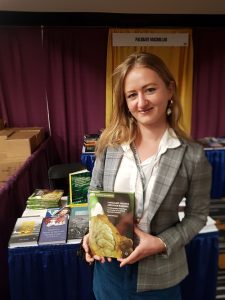 Following on from my discussion with Sandra Obradović last month, I took once more to the cafes of London to discuss identity over coffee with OICD Research Fellow Gwen Burnyeat. Gwen is a Wolfson PhD scholar in Anthropology at UCL, and documentarian. Her 2016 film Chocolate of Peace, which depicts the Colombian Peace Community of San José de Apartodó’s resistance to paramilitary violence, has been translated into several languages and has won several awards, including the best feature-length film on post-conflict at the International Documentary Festival of Bogotá (MidBO), among others.

Armed with a voice recorder and a coffee loyalty card, we had a fascinating discussion that covered topics from the impact of documentary film, to coffee beans, to the continuing asymmetry in power relations between the Global North and South. What follows are the highlights of that discussion.

Gwen’s research can be divided into two main thematic strands, which we discuss. Firstly, she examines victims of state violence in Colombia. In particular, her work with the NGO Peace Brigades International, and academic research and involvement with the Peace Community, have sought to give a voice to victims of Colombian state violence. Her book Chocolate, Politics, and Peace Building, published in 2018 by Palgrave Macmillan, provides an ethnography of grassroots peace building, and its relationship to the formal peace process, as experienced by cacao farmers in the conflict region of San José de Apartadó.

Secondly, her current doctoral research moves from studying community actors to government actors in Colombia. In particular, she is conducting an ethnography of the Office of the High Commission of the Peace, which, between 2012 and 2016, was responsible for brokering a peace agreement with the FARC (Revolutionary Armed Forces of Colombia) guerilla, which sought to end five decades of political violence. The government sought to explain and make this peace process legible to Colombian citizens, in a strategy they called “peace pedagogy”. This, in Gwen’s analysis, represents “too little, too late”, after decades of internecine conflict and historical distrust in the state.

Asked why she transitioned from studying grassroots communities to governments, Gwen responds astutely that, whilst her solidarity remains unshakably with victims of state violence, we must give the same “interpretive dignity” to governments “if we are ever hoping to change them”. Moreover, Gwen argues that “we can’t really understand a government as an ‘“ethnographic world’” without understanding how it interacts with society”. This idea that, rather than being separate entities, governments occupy a tangibly real space in our social world, and, like any other organisation, are composed of human beings, is a thought provoking one. Gwen argues that such an interpretive perspective “could also be applied to the UK or anywhere else”.

These two research themes – communities and governments – coalesce into an overall goal of better understanding the experiences of victims of state violence, and challenging the political infrastructure than enables such violence.

I closed our discussion by asking Gwen how her research connected with the ethos of the OICD, and what tools cultural practitioners could extract from it to use in their own work.

Firstly, she mentions the importance of recognising cultural forms outside of academic writing – for example, a film, a song or a painting – in engaging emotionally with other people’s stories. Film, in Gwen’s case, has allowed a light to be shone on the human dimension of the Colombian conflict in a profoundly intimate and compassionate way.

Secondly, by “looking at governments as human beings… and understanding them as occupying a specific position in a society” – i.e. by humanising them – we can work more effectively at transforming them. Because the position of governments is culturally and historically constituted, it can be changed in the future.

Finally, Gwen argues that looking at academic and cultural developments in the Global South can inspire us in the Global North. Wryly, Gwen remarks that “the Global North has been telling the Global South what to do for far too long, and that hasn’t panned out very well”. The current explosion of “post-truth politics” in western nations could, for instance, be better contextualised by looking at the failed Colombian referendum of 2016. Moreover, reading authors from the Global South in conjunction with “canonical” European texts gives a richer understanding of local processes, and a more expansive theoretical approach, than just taking local scholarship as “data”. This idea – that actually engaging with local scholarship provides a richer, and more compassionate, understanding, – seems foundational to Gwen’s academic and humanitarian objectives. I believe that we could all learn from such an approach.