Thank you to all those who contributed to this workshop. A summary of discussions on day two follows. 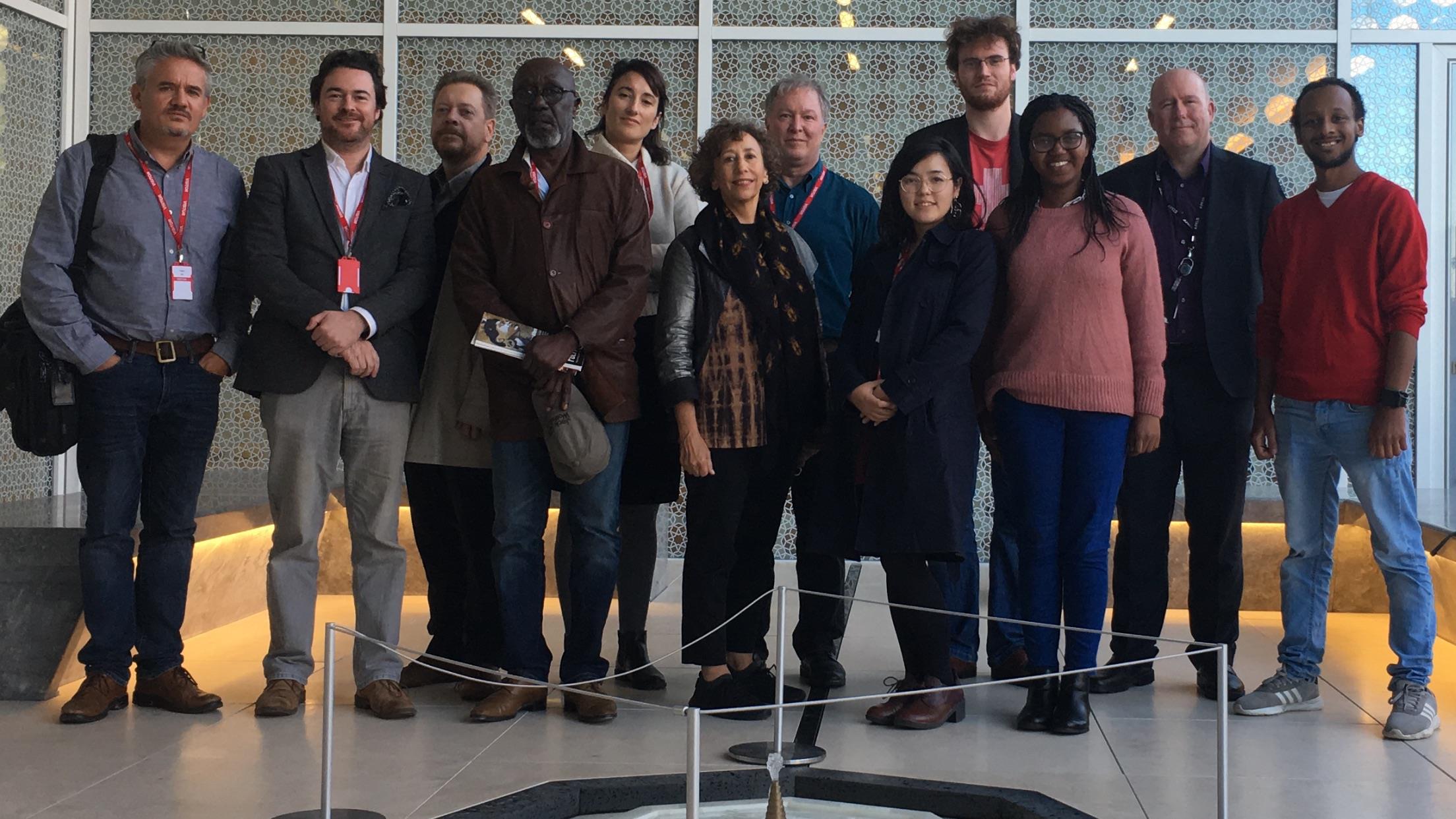 On day two of the workshop, three roundtable panels extended issues addressed in the presentations and discussions of day one (these presentations are listed at the bottom of this page). These discussions explored the application of relevant approaches to problems of conflict transformation, mediation and management. Invited panelists were experts in their field who were each asked to provide a brief summary of the implications of the relevant panel discussion topic within the context of their academic, regional or practitioner context. The roundtable discussions took account of theoretical and practical challenges, identifying problems and limitations but also flagging up possible solutions and ways forward. Panelists responded to the following themes and questions. A summary of these discussions follows.

PANEL DISCUSSION #1 Researching and Analysing Identities in the Field
What are the challenges of collecting data relevant to identity? How do we analyse the data once it is there? What kind of outcomes of should identity research and analysis aim for or expect?

PANEL DISCUSSION #2 Formulating Intervention Strategy and Implementation Design
Once we have reliable research and analysis on identity-based dynamics, how do we turn that into a useful intervention strategy and design? What are the limitations? What are the opportunities?

PANEL DISCUSSION #3 Operationalising and Evaluating Interventions
What kind of intervention platforms and approaches work best in the real world? How do we get buy-in for these with stakeholders? How do we evaluate the effectiveness of interventions and demonstrate value for money and value of approach?

Researching and analysing identities in the field:

What are the challenges of collecting data relevant to identity? How do we analyse the data once it is there? What kind of outcomes of should identity research and analysis aim for or expect?

Opportunity: could ethnography be utilised more regularly as a resource for NGOs working in conflict resolution?

Question: at what levels are informants conscious of their own cultural practices/identity expressions?

Question: How can ethnographers misrepresent the cultural reality through the questions they ask?

Identities are situational/contextual, individuals are often provoked to identify as something or demonstrate their cultural background and therefore their identity

Data Collection: recommending the multivariate analysis, emphasising the need to embrace data collection methods that can deal with nuance and complexity

Question: what cultural elements are being used to weaponize identity? How is this countered?

Clarify Elements: what are the elements that can be used as a source of weaponization?

Importance of collaboration: if two researchers collect life stories then those stories could differ based on the positionality (gender, ethnicity, culture, age, experience, personality) of the researcher

Cultural identity, weaponization is all linked to feeling safe; theme of security

Art as a research vehicle; a way of understanding political/identity conflicts and forming a solution simultaneously:

How can the arts be used to gather information?

Question: how does self-identification change through the creative/artistic process? How do people realise self through creativity? How is creativity therapeutic?

Weaponizing art: Nile Project; a multinational band that plays on the Nile and raises awareness about political problems/conflicts in the Nile basin,

Problem: is there an issue with the implications behind the term ‘Weaponizing art’?

Could researchers utilize sport in the same way they utilize art? A way of understanding the tensions within cultural contexts.

Opportunity: could we do a discourse analysis of propaganda?

How does a researcher deal with the ability of identity (principles, ideals, beliefs) to undergo massive and rapid change? How can an intervention account for that?

How much info to we need in order to build a meaningful strategy that addresses conflict? When should the information flow stop?

Social Media; can this be used to analyse the source of conflict, the core grievance (land, economic, revenge, trauma)

how can ethnographic research not only identify the causes of manipulation/conflict/ division but also study peace? How do they pinpoint what elements/factors lead to and create Peace?

Does ethnographic analysis risk emphasising symbolic/cultural reasons for conflict over simpler material/logical reason? Does it risk collapsing the distinction between leaders and foot soldiers, manipulators and the manipulated

Once we have reliable research and analysis on identity-based dynamics, how do we turn that into a useful intervention strategy and design? What are the limitations? What are the opportunities?

Question: How can we use the material gathered in the field to create a methodology that addresses the causes of conflict and division within a society?

Could you start with an intervention/methodology which then guides research?

Importance of the co-production of research knowledge; research has to be co-developed with local knowledge because locals will intuitively know what intervention will be appropriate for the context

Question: the category of the ‘Local’ person is a convenient fiction in many ways; there are so many disagreements, complexities, tensions within the cultural context/population being researched

Solutions: this requires a constant reappraisal of interventions

Solution: entry point strategies to be neutral to avoid controversy and political division

Opportunity: could OICD perform a power analysis of the local context and the intervening project/organisation?

Question: what is OICDs role within a conflict zone? Is it independent, is it neutral? Or is it trying to organize the actors/organisations already operating in the region who are on the ground?

Theme: ‘Do No Harm’; must be aware of the danger of interventions that could end up doing more harm than good

Example of Harm: the ‘Newborn’ campaign in Kosovo, funded by Saatchi & Saatchi was an attempt to foster a narrative of national cohesion and harmony in the newly independent Kosovan State:

A subtler example of Harm: have research and policy intervention into addressing the problem of Islamophobia within Western European country’s possibly done more harm? Why?

Opportunity: Can we use Journalism to steer popular opinion away from issues that may cause huge tension?

Question: are we being too cautious about avoiding backlash? Sometimes a completely new narrative on a conflict can be the radical, ‘fresh start’ that a society needs:

They haver songs are about having to constantly post online following an outbreak of violence to let friends know they are alive, becoming very popular with Palestinian youth

Question: how can you tell an Honest broker from a Spoiler? Requires us to define and determine honest brokers

Question: need to more clearly define the source of the oppositional, grievance narrative that is causing conflict. Must break it down to the individual level; where is it coming from?

What kind of intervention platforms and approaches work best in the real world? How do we get buy-in for these with stakeholders? How do we evaluate the effectiveness of interventions and demonstrate value for money and value of approach?

Discussion of Artistic interventions into contexts of ethnic and cultural tension:

Opportunity: how far can you take the idea of playing games especially in a technological era of consoles and virtual reality?

Opportunity: How can OICD use artistic interventions into conflict areas?

Food represents another means through which to foster harmony, empathy and understanding between segregated cultural and ethnic groups.

Insight: All these interventions (food, art…) are about breaking with the established societal consensus of each context that two identities have to operate in opposition, as a duality

Opportunity: what other methods can be used to address tension/division?

Question: would OICD compete with weaponized narratives risking potential backlash and adversary? Or would OICD attempt to remove weaponization from the society all together?

Question: how long would it take to internalise a new narrative? What is the time process for a cultural group to change their identity formation?

Opportunity: divisive, manipulation narratives can produce changes in people’s identities within an incredibly short time frame. But this also means the changes that are produced can dissipate or be countered very quickly

Opportunity: Could OICD lead more investigation into the process of European based diasporic populations returning to their countries of origin and taking on positions of political power.

Need to be very deliberate in framing ‘what is the problem that we are trying to solve’; need focus 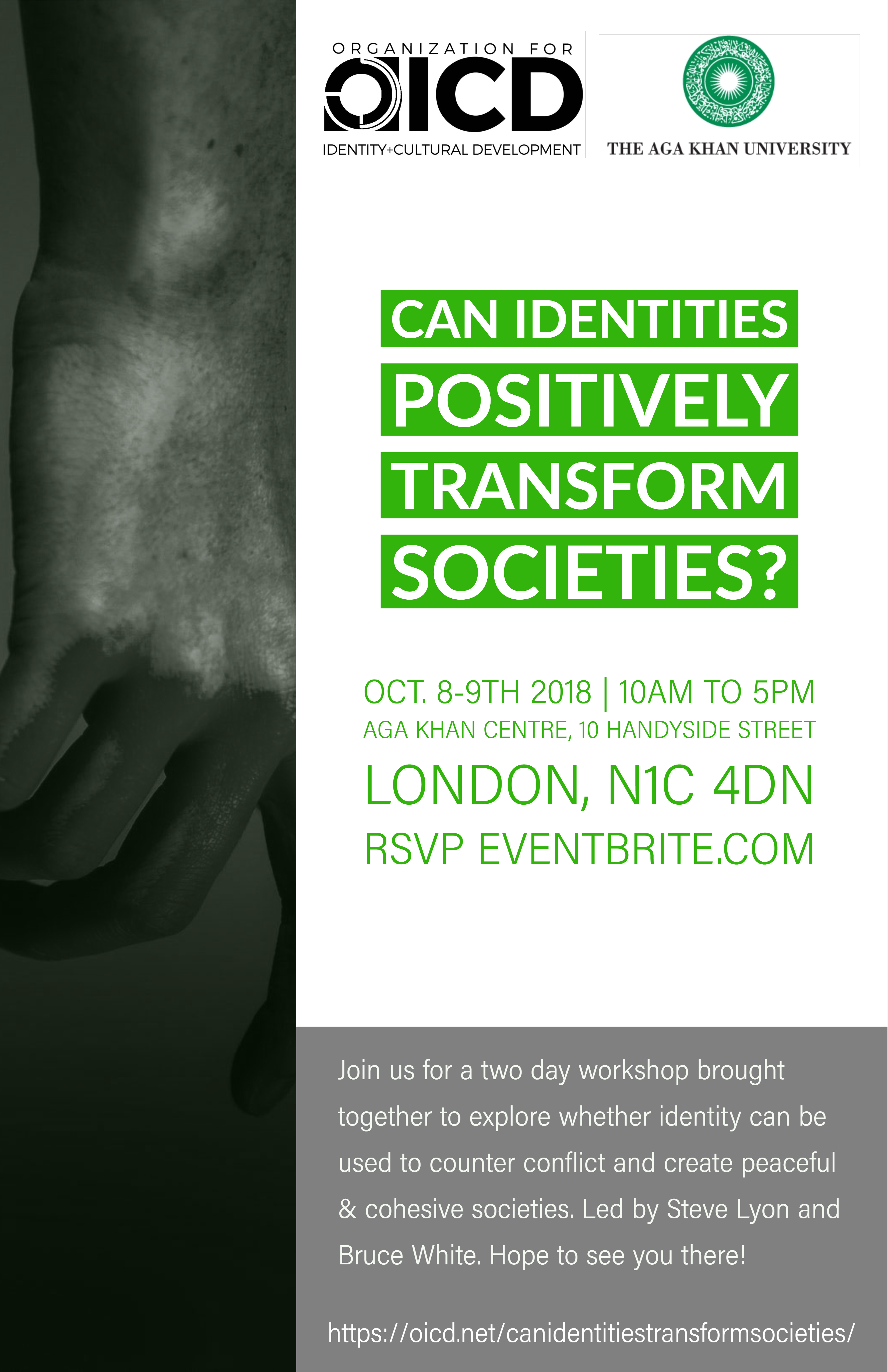 The OICD is proud that the Institute for the Study of Muslim Civilisations, Aga Khan University, were our partners and co-hosts in a workshop held in King’s Cross, London on October 8th and 9th 2018. The theme of the workshop was:

Peace and conflict scholars of identity have been generally optimistic that human identities offer great potential to transform conflict and promote cohesion in society. Part of the optimism comes from observations that the opposite is true–that identities are often used to divide and promote conflict in the world. The logic is that if the mechanisms through which divisions are made are understood and modelled, then they can be utilized to prevent and reverse divisive manipulation.

Despite the sound theoretical basis of the optimism, researchers and practitioners have found it difficult to translate the scholarly observations into tools and models that can be applied to real world practice. The workshop investigates why this might be the case, delving into the theoretical and methodological challenges that the development of such tools and models present.

The workshop brings together scholars and practitioners who all in someway work towards identifying and overcoming the challenges of theory and method. Theoretical questions include: what are the critical dynamics of identity and how can they be modelled to help to positively engage identities? Methodological questions include: how can we research and identify ways in which people shift their representations between multiple cultural concepts and narratives?