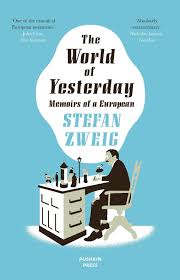 The Jewish-Austrian author Stefan Zweig’s memoir The World of Yesterday: Memoirs of a European offers an erudite and personal insight into the seismic transformation of European society between his birth in Vienna under the Habsburg Monarchy in 1881, and his suicide in exile in 1942. Zweig powerfully maps the fall of an internationalist consensus of European fraternity, based on a shared recognition of cultural and historical kinship, to a tragic clash of violent and expansionist ideologies, which found their quintessence in Hitler’s Germany.

I will focus briefly on Zweig’s analysis of the events leading up to the outbreak of the First World War. Whilst any rereading of the events of 1914 no-doubt amounts to a tired cliché among contemporary historians, Zweig offers a unique perspective on the function of intellectuals, writers and artists in times of impending crisis.

Zweig writes that the intellectuals and artists of his time acted too late, and, in a stupor of creative naivete, assumed that inter-European tensions would be dispelled without the need for war. As he argues, the sense of economic expansion, urban regeneration, artistic renaissance gave a chimeric sense of, to quote German philosopher Immanuel Kant, “Perpetual Peace”:

“Today’s generation has grown up amidst disasters, crises, and the failure of systems. The young see war as a constant possibility to be expected almost daily, and it may be difficult to describe to them the optimism and confidence in the world that we felt when we ourselves were young at the turn of the century. Forty years of peace had strengthened national economies, technology had speeded up the pace of life, scientific discoveries had been a source of pride to the spirit of our own generation. The upswing now beginning could be felt to almost the same extent in all European countries.”

Worse still, when war finally did break out, many of the writers Zweig considered an affinity to were swallowed up by the jaws of patriotism. Most infamously, Ernst Lissauer, once an avowed “Europeanist”, wrote the Hassgesang gegen England (Hymn of Hate for England). This poem was then deployed as a propagandistic rallying cry for the German and Austrian public in mobilising against their new enemy. Thomas Mann, the great German writer of the late-nineteenth century, penned Reflections of a Nonpolitical Man during the war in an attempt to justify German “authoritarianism” over Anglo-French “democracy”. The splintering of the Europe of Zweig’s youth – understood as a sphere of cosmopolitan and fraternal cooperation – into that of one nation against another was, to the despair of the author, given cultural legitimacy by the work of his fellow writers and artists.

We should extract from Zweig’s warning two key points. First, as also explored by Walter Benjamin, we should understand how easily art (and, moreover, artists) can be repossessed by modern political apparatus to serve an ideological cause. This cause is often contradictory to the context in which the artwork was originally conceived. One only needs to look to Donald Trump’s use of Bruce Springsteen’s Born in the USA at his rallies, a song written in stark opposition to US intervention in Vietnam, to see this process at work in the twenty-first century. Secondly, we, as artists and writers, should endeavour not to heed the warning signs of crisis too late, and harness the true potential of art to serve humanitarian objectives, and to challenge, critique and re-imagine a world that seems so intent on sleepwalking towards ruin.

Oliver Puckey is an OICD Intern