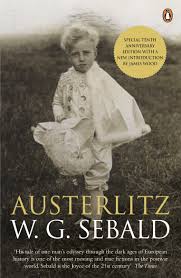 As part of Identity Digest’s new Book Showcase section, OICD Project Development Officer Luke Reilly, focuses on the theme of identity as evoked by place, the numbness of its absence and the joy and pain of its discovery, resonating throughout WG Sebald’s haunting masterpiece Austerlitz.

Austerlitz is a story that drifts melancholically from one breathtakingly described place to the next. From cathedrals to fortresses, residential London streets to colonial era, Belgian Train stations. Wastelands of Welsh Manses to Babylon like, Parisian Libraries with forests locked inside. From the insides of a McDonalds lit by headachy light to the Theresienstadt Ghetto, where the book’s protagonist Jacques Austerlitz believes he catches a fleeting glimpse of his birth mother in the footage of the WW2 era German propaganda film that was made there. A film that convinced Red Cross observers that its Jewish prisoners of war were healthy and happy, even participating in community made operas and theatre plays, all held captive in a wartime utopia.

Each place in Austerlitz is, like Theresienstadt, a ‘set’. As artificial, precise and controlled as a theatre or sound stage. And each place seeps into the souls of the individuals who occupy it, overpowering them with awe, with memory or, like Theresienstadt, exquisitely deceiving their potential saviours and hurrying its occupants, Austerlitz’s mother among them, towards their horrendous fate.

Given this, it is very telling that the first ‘place’ Austerlitz’s readers are introduced to is a Nocturama in Antwerp. As Sebald describes, a Nocturama is a zoo that houses nocturnal animals like owls, bats, Aye-ayes, jerboas and bush babies. It induces in its walls an artificial dusk and darkness so that crowds of upright, diurnal primates, known as humans, can marvel at fellow organisms they would normally not be able to see. The animals contained inside their cages are deceived. Sebald points out that, presumably, at closing time, as the sun sets over the rest of Antwerp, the Night-keepers inside will light the cages and watch as the occupants curl up to sleep, trapped in a continual illusion and completely unaware that their natural rhythms have been utterly upended. They are living a transplanted life, stage managed by organisms with completely different behaviours and life cycles from themselves.

The predicament of the nocturnal animals’ mirrors Jacques Austerlitz’s story and the search for his true, natural identity beyond his empty, stage-managed confines. “Since my childhood and youth”, he confesses to the books second narrator, a man resembling Sebald, “I have never known who I really was”. Early childhood memories from Czechoslovakia appear to him like visions and reveries, as distant and unfathomable as dreams. In contrast, he assumes his waking life, growing up in the Welsh Manse under the name Daffyd Elias, the only child of a dreary Calvinist Preacher and his deeply melancholic wife, to be his true reality. In fact, as Austerlitz explains to the man resembling Sebald, this reality was as artificial and as false as the daylight the animals confined in the Nocturama slept beneath.

Long after the sad, lonely deaths of his actor-parents and several battles with severe depression, Austerlitz journeys to central Europe and discovers he is in fact the son of a Czech Theatre actress and her politician husband, both Jewish. As the Nazi war machine spilled across Europe, Austerlitz was sent to Wales on the Kindertransport as a very young boy. After reuniting with his aunt, haunted by her own failure to aid her sister and her husband, he recalls his mother tongue and drifts through his old home, his old town, speaking in his old language, his personhood pulsing with euphoric memories as the natural rhythms he was transplanted from surge through his body and soul once more. Austerlitz then turns his attention to learning the identities of his parents, identities stripped of their nuances by Nazism, deemed undesirable and confined in ghettos to be very nearly wiped from history. From the destruction and the dread of history, Austerlitz determines to salvage the identities of his parents.

Austerlitz emphasises the need to reconstruct and preserve identity both on the level of the individual, the collective, in both the past and the present and for the sake of the dead and the living. It explores the urgent psychological need for the human mind to have a rich and true sense of self, past, culture and family, to which Austerlitz’s bouts of depression before his journey to Europe attest. By showing how Austerlitz accesses his past through conversations with his aunt and by scouring archives kept by the Czech Government, we are reminded how the reconstruction of identity is a collective project carried out by both family and state, a fundamental societal structure intrinsic to civilisation itself. The book also explores the need for preservation and shows how identities have a span long beyond human life. Though the war dead are gone, their identity is all that remains of them and, to make peace with the past, it must be preserved.

Austerlitz does eventually identify his mother, captured in her Nocturama, transplanted to her stage set in the Theresienstadt Ghetto film, but the face of his father remains elusive, ground to nothingness by war. Despite the deep, human need to preserve a rich and nuanced identity, to cherish and foster it, our equally creative capacity for invoking identity groups to destroy each other’s lives, cultures and memories through war puts this project under continual danger. It is within this paradox that the OICD will continue to work.

US Holocaust Memorial Museum Article on the history of the Ghetto https://encyclopedia.ushmm.org/content/en/article/theresienstadt