from Queen’s University’s ISCTSJ and the OICD

On the 4th and 5th of June 2015, practitioners and academics from many different fields came together at Queen’s University, Belfast for a two-day conference. The first day consisted of position pieces, academic papers and discussions. The second day consisted of a workshop designed to provide its participants with a unique insight into the OICD’s EMIC process and its capacity to build bridges between practitioners and academics.

The conference was hosted by the Institute for the Study of Conflict Transformation and Social Justice (ISCTSJ) and the Organization for Intra-Cultural Development (OICD). 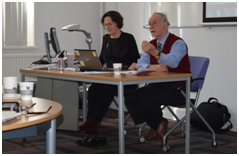 Strathern and Dr. Pamela Stewart, a wife and husband research team based in the Department of Anthropology at Pittsburgh University, opened the conference with their presentation “Engaging conflict and peace through identity.”

Dr. Katy Hayward of the School of Sociology, Social Policy and Social Work and research fellow at the

Institute of Irish Studies at Queen’s University started the second session of the conference with her contribution:  “The Conditions in which ‘identity’ becomes Contentious.”

Dr. Neil Jarman, Director of the Institute for Conflict Research in Belfast, who has worked intensively on the political transition in Northern Ireland, followed with his lecture: “Sharing with Segregation: Twenty Years of Peace in Belfast.”

Dr. Paul Nolan, director of the Northern Ireland Peace Monitoring Survey and faculty member of the Queen’s University Department of Education, opened the conference’s third session with his talk, “The facts on the ground: demographic drivers of change in Northern Ireland”.

Dr. Cathal McManus, director of the Open Learning Office, followed with a presentation on “Marching Matters – A problematic tradition for the Orange and the Green?”

Pamela Stewart and Andrew Strathern ended the conference with their second presentation, “Peace and Conflict: Ritual Bridging,” which illustrated the importance of rituals in conflict resolution and their peace-building potential.

Dr. Bruce White closed discussion for the day, thanking the presenters and audience for their participation.

Each participant had received one of four unnamed data sets the day before the workshop. As preparation for the workshop, they were asked to read through the datasets, without knowing to which groups the datasets belonged, in order to develop a basic understanding of the identities of the different groups.

On the day of the workshop, the 21 participants arrived at a conference room transformed: all that awaited them were four numbered tables. Still unsure what the day would bring, the academics and practitioners took their places. The first task was introduced: “Everyone at your table received the same dataset; as you have already noticed, the datasets are unnamed. Your task is to find a name for your group.” This first task proved challenging as the academics sought to avoid blatant categorization; the tables found themselves engaged in intense conversation involving explanations for different names. The following names were decided upon: ‘White British Nationalists,’ ‘disaffected threatened Muslims,’ ‘young British Asian Muslims,’ and the ‘Perpetuated.’

The blank sheets of paper in the middle of each table were waiting to be written upon. The next step awaiting the participants was the visualization through mapping of all the key concepts, symbols, and narratives. A short introduction by Dr. Bruce White on the EMIC’s mapping process left the participants with many questions. “What does he mean by this?” was the overall question to be read in the participants eyes as they entered into new and intensive discussions. Every group developed their own methods of visualization and mapping:

As each group presented their maps, the first pieces of the puzzle began to fall into place. Similarities between the groups began to emerge. For instance, the ‘British White Nationals,’ who presented last, pointed out their group’s conception of themselves as protectors of women. This narrative proved to be shared by the ‘Disaffected and Threatened Muslims,’ who also viewed themselves as protectors of women. The first round of presentations ended with applause and the participants headed off to a much-deserved coffee break.

The second session started with a reorganization of the groups. Before, every group was united by a shared data set; th

e new groups had representatives from every former group. The table members rotated and after introductions the next task followed: “You now have from every former group at least one expert. We already discovered that there seem to be similarities in how the groups construct themselves or ‘the other,’ how they situate themselves within society … What are the similarities and differences within the key concepts that your different groups access?”

New discussions emerged and notes were taken during the keen discussions. At the end of the session each group presented and the ideas were collected on the white board:

y the other groups and being dismissed or not represented by the media or political system. These feelings aroused anger, resulting in marginalization, demonization or feelings of exclusion from society. These feelings of exclusion triggered a search for belonging which could result in a higher vulnerability to being attracted by extremist approaches or in a need for self defense entailing attacks against other groups. Similarities were clear and the dynamics, both between the groups and within their own identity constructions, were difficult to miss. These were just some of the great results and combinations that the groups came up with during their presentations.

The next questions were: what interventions or strategies could be built upon the knowledge gained through the research, mapping and analyzing processes? How can peace be promoted and cohesion be built between these different groups?

Participants worked within their groups, keenly discussing to collect possible ideas and complete the bridge between academics and practitioners.

In a last presentation round the ideas were once again collected on the whiteboard.

One of the great overall themes was the building of mutual understanding, involving the overcoming of walls that enable groups to establish images of other groups as the enemy and sustain marginalization. Questioning of the conflicting role of government within peace processes, calls for education and critical thinking were further discussed.

Finally, last ideas and common threads were discussed. After a round of applause and a big thank you to all the participants for choosing to slip once more into the student role, the ISCTSJ and OICD’s Belfast conference drew to a close. It is the hope of both organizations that everyone involved left inspired and with a fresh perspective.